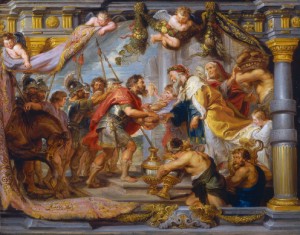 This begins Question 20, which examines how God has acted to redeem humans from the miserable and deadly estate of sin. Here we find that God’s action of redemption centers in the COVENANT OF GRACE, which God fulfills on the basis of His own character.

Such a powerful section! God’s choice of us in Christ — covenantal choice, which existed before the world began: we are ever loved by the eternal God! Explanatory Question 3 tells us that God’s purpose of grace and love towards us HAS NO BEGINNING, for He loves us from everlasting. Wow! We can only bow, and give thanks and praise for our heavenly Father loving us and choosing us before the world began… Alleluia!

Likewise, Explanatory Question 24 tells us that the Covenant of Grace exists from all eternity, or before the world began! Titus 1:2.

As Alyssa Wright has sung in song, our sin did not catch God by surprise — for He has loved us before the world began. It is thus that our failure can never have the last word! For we are chosen by God in Christ, enrolled in the Covenant of Grace, before ever we came to be — fully known, related to by the eternal God, when as yet we were physically unformed. The One who loved us and chose us before we were born is the One who will ensure that we endure to eternal life: He who began a good work in us will be faithful to complete it. Alleluia!Be blessed in the reading! As follows:QUESTION 20: Did God leave all mankind to perish in the estate of sin and misery?
ANSWER: God having out of His mere good pleasure, from all eternity, elected some to everlasting life, did enter into a covenant of grace, to deliver them out of the estate of sin and misery, and to bring them into an estate of salvation by a Redeemer.

Q. 1. What became of the angels that fell, by their sinning against God?
A. God left them without remedy, in that state of sin and misery into which they plunged themselves; and hath “delivered them into chains of darkness, to be reserved unto judgment,” 2 Pet. 2:4.Q. 2. When man joined with the devil in a conspiracy against God, did God treat him the same way?
A. No; he had a purpose of grace and love towards some of Adam’s race; and therefore, immediately after the fall, declares his fixed intention of assuming the human nature, in the person of the Son, that he might redeem lost man, and bruise the head of the old serpent, that had ruined him, Gen. 3:15.Q. 3. When did God’s purpose of grace and love, towards any of the human race, commence or begin?
A. It never had a beginning; for he loved them from everlasting, Jer. 31:3; Eph. 1:4.

Q. 4. Can any reason be given why God has elected fallen man, rather than fallen angels, and why he elected some of Adam’s race, and not others of them?
A. It is tenuous to search into the reasons of holy and adorable sovereignty; it becomes us to acquiesce in this, that God did it out of his mere good pleasure, Eph. 1:5; Matt. 11:26.

Q. 5. To what happiness did God ordain his elect from among men?
A. He ordained them to everlasting life, Acts 13:48 — “As many as were ordained to eternal life, believed.”

Q. 6. Did God make choice of any to eternal life, because of their foreseen faith and holiness?
A. No; because faith and holiness are the fruits and effects, and therefore can never be the cause of election, Eph. 1:4-6.

Q. 9. If Christ is not the cause of election, why are the elect said to be chosen in him?
A. Because in one and the same decree of election, the love of God lighted both upon the head, and upon the members, considered as in him, Eph. 1:4.

Q. 11. How are sinners of mankind to be viewed in relation to a Redeemer?
A. As lawful captives, Isaiah 49:24.

Q. 12. What is it to redeem the lawful captives?
A. It is to pay down a sufficient ransom to offended justice for their deliverance, and to rescue them by mere force and power out of the hands of Satan, Isaiah 49:25.

Q. 13. What ransom is laid down to offended justice for their deliverance?
A. Nothing less than “the precious blood of Christ,” or his obedience unto death, 1 Pet. 1:19.

Q. 15. Why did the Redeemer, in dealing with justice, lay down a price; but in dealing with Satan, act by way of power?
A. Because God, being the creditor, had a right to demand a price, but Satan being only the jailer, has no law right to detain the prisoner, after the creditor is satisfied; and yet, refusing to quit hold of his captives, the Redeemer’s power must be put forth for their deliverance, Luke 11:22.

Q. 16. Was there a covenant transaction entered into for their deliverance, by price and power?
A. Yes; Psalm 89:3 — “I have made a covenant with my Chosen.”

Q. 19. Are not heaven and earth both concerned in this covenant?
A. Yes; because it is a covenant of peace between them, Isaiah 54:9, 10.

Q. 20. Who is the party contractor on Heaven’s side?
A. It is God himself, the proposer of the covenant, and the offended party, Psalm 89:3.

Q. 23. In what does this covenant consist?
A. In the mutual agreement between God and his chosen One.

Q. 27. How was the covenant of grace made with Christ as the second or last Adam?
A. The Father purposed that a remnant of lost mankind should be the members of Christ’s body, and gave them to him for that end; and Christ, standing as second Adam, accepted the gift, John 17:6; as also, the Father proposed to him, as the last Adam, the covenant of grace in the full tenor, condition, and promises of it, to which he consented; and thus the covenant of rich grace was concluded between them; Zech. 6:13 — “The counsel of peace shall be between them both.”